There's a growing controversy over two party crashers at this week's state dinner at the White House.

White House apparently takes a security breakdown as well as some kind of nerve. The Secret Service is investigating its own security procedures after determining that a Virginia couple, Michaele and Tareq Salahi, managed to slip into Tuesday night's state dinner at the

White House even though they were not on the guest list, agency spokesman Ed Donovan said. President Obama was never in any danger because the party crashers went through the same security screening for weapons as the 300-plus people actually invited to the dinner honoring Indian Prime Minister Manmohan Singh, Donovan said.

The couple even snagged a photo with the Vice President. 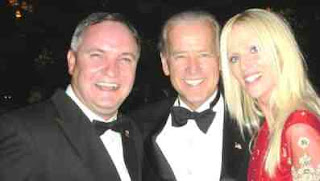 This isn't merely embarrasing but dangerous. If party crashers can slip into the White House, then anyone can, and our president is at risk.
After a full investigation, we should all expect those responsible for the breach to no longer have their jobs.
Posted by mike volpe at 7:16 AM