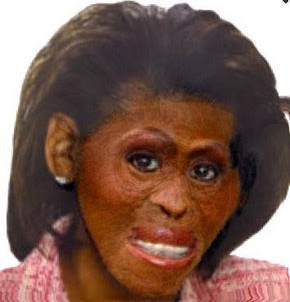 A couple days back, a web site propped up a photo of Michelle Obama as an ape. The photo is obscene and offensive and that's all that should be said about it.
The backstory, however, is of interest. The website, which I can't track down, put up this photo and figured out how to get recognized at the top of several word searches from Google. The folks at Google didn't notice that they were creating traffic for this obscene photo. By the time they did, the photo had travelled to several other sites.
Eventually, Google did take down links to this site but not because of the obscene nature of the site. Instead, the site had collected several viruses. That's an often side effect to creating obscene material. Hackers try and punish you by creating viruses on your site. I found that out when doing a series on racist web sites which also are under the constant threat of virus.
The only story I've found so far on this is one on a Russian language site.

Essentially, the story says everything I've said and also says that according to Google, they don't censor based on content. As such, such offensive material wouldn't necessarily be censored from Google searches. In fact, that's true. You can find porn, hate sites, bomb making sites, on such search engines as Google. Google took down the site after the virus was discovered. Google represetatives said that they will take down a site from their searches if a virus is discovered but they won't take down a site based on content, because that's a free speech issue.
That's a specious argument. No one has the right to appear on a Google search. As such, Google can take any site down from their searches for any reason. They can, as a matter of policy, allow all content on their search engines because Google doesn't want to self censor based on content. That said, that wouldn't be a matter of law but an internal policy.
In fact, I would agree with such a policy because offensive is a subjective idea. Once any search engine begins to censor based on content anything can become offensive and free speech would be infringed. That said, that free speech would be infringed by a private company on their own internet sphere which they would have every right to do.
Posted by mike volpe at 8:17 AM

perhaps it would be best to link to the image instead of plastering it on your frontpage.

True, however, the image is the center piece of the story. How can I write about it without showing you the offensive image at hand.

you support this because you write the same crap instead of a picture. Is it not so ?

I've yet to see you post images of soldiers brutalized (middle east) or tortured detainees (gitmo) or when you write about such topics.

There seems to be a level of professional decorum missing when you post the image. It's blatantly racist, displaying the image really serves no purpose, I challenge you to find it in any MSM outlet or on TV, before you claim journalist altruism.

I think better reporting requires a bit of discretion, link to the image if you feel it's pertinent, but this seems inappropriate.

I've been a reader for quite some time but if this is really the direction you're taking it (shock and awe), this is too much for me.

Most people don't go to links and I did post the link since it's from the Russian speaking newspaper. I said why I posted it and that's all I can say. If you disagree then that is your right and I respect it but I did what I did.

As for the second comment I don't think I ever talk about Michelle Obama and criticizing Obama is not the same thing as this image.

It's good you posted the image directly. It's hard to find online now, even for historical purposes. The other commenter is just trying to censor the net further with b.s. phrases like "professional decorum", "discretion", and "inappropriate". Choose whatever euphemism you want, it's still an attempt at censorship. And no, this image does not even remotely compare to images of brutalized bodies. Get a grip.