A cultural controversy is forming.

One of the world's most famous children's toys, Barbie, has been given a makeover - wearing a burkha.

Wearing the traditional Islamic dress, the iconic doll is going undercover for a charity auction in connection with Sotheby's for Save The Children.

More than 500 Barbies went on show yesterday at the Salone dei Cinquecento, in Florence, Italy.

Already conservatives are calling for a boycott.

That’s right. I am talking about the new Burqa Barbie doll which is now on display in Florence, Italy, to celebrate the fiftieth anniversary of the Barbie doll. As my colleague over at weaselzippers wonders: Will clean-cut Ken now come (pun intended, ‘tis mine) with four burqa’ed Barbie doll wives?

Ah, I am such a Grinch. After all, the Burqa Barbie is being auctioned off for the Save the Children charity.

Save the Children? Surely, you must be jesting. I would like to save the children from this as well as from every other Barbie doll. (Yes, I know Barbie has diversified and now comes in every color and profession). But naked, even Doctor Barbie is still a pagan goddess or fertility figure but one with absolutely no relationship to female biology or reality. 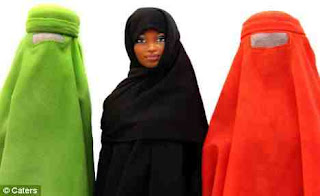 The set of Barbie's include one that is in the style of those that became infamous for the oppression of women.
Mattel, the makers of Barbie, have stated that they want for Muslim girls to have a role model in a doll.
I'm not sure that a Burqa wearing doll would be a role model. Instead, it would be another reminder of where in society many Muslim nations view women.
This story is far from over and the debate will continue.
Posted by mike volpe at 10:34 AM

Ken will be wearing a blow up belt