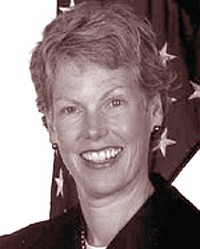 Judge Karen Asphaug of Minnesota's 1st Judicial District is back and involved in a Rucki related matter.

Judge Asphaug will be hearing a pre-trial conference in Dede Evavold's violation of a protection order criminal case.

Asphaug is very familiar with Evavold, having been her trial judge in her previous criminal trial.

That was for Evavold's role in hiding the two oldest Rucki daughters from April 19, 2013, until November 2015.

The two oldest daughter, Samantha and Gianna, ran that day after being told they would be forced to live with their paternal aunt, Tami Love, part of a larger plan to transition to live with their father, who they said abused them repeatedly.

Here is more from Samantha in an audio she made shortly after running.

Here's what I said in The Daily Caller.

On April 19, the girls were taken to a police station and told they were going to be living in their home with their aunt Tammy, as per the September 7 order, before transitioning to live with their father.
The girls were escorted home by police where Tammy awaited. Approximately 30 minutes after the police left, they ran away. On the road they called their mother for help.


Asphaug also exclude any evidence that David Rucki was violent from that trial (here's an article I wrote showing this); she also sentenced Evavold to the maximum of one year and one day and an astounding eight years of probation.

Evavold was one of four defendants to be tried along with Sandra Grazzini-Rucki and Doug and Gina Dahlen.

Asphaug wound up on all four cases, ruling similarly regarding the evidence, or lack thereof which would be allowed into the trial showing David Rucki's violence.

In Sandra "Sam" Grazzini-Rucki's case, Grazzini-Rucki was told to serve her sentence- also a year and a day- but do it chunks at a time, so that she would still be serving time six years later; that sentence was reversed.

Asphaug also approved a juror who said his ex-wife kept his children away from him much like Grazzini-Rucki was accused of doing to David Rucki.

All four defendants asked Asphaug to recuse herself from their cases for bias but she refused.

Asphaug also recently granted David Rucki's motion for a fifty year protective order barring Evavold from saying his or his family's name anywhere in publicly until 2069.

That order is below.

Extended HRO by mikekvolpe on Scribd


As I discussed in this interview on Northwest Liberty News, the whole affair started with some blog posts which offended David Rucki. But
Asphaug and David Rucki

Asphaug's involvement with David Rucki goes even further than that. On September 8 2009, David Rucki screamed uncontrollably at two and three year olds, according to a police report. Here is part of that police report.

Complainant stated his wife, two children, and six daycare kids ages three and under were in the driveway when suspect approached. He stated the suspect threatened his wife, his son, and called them all assholes while standing in the cul-de-sac in front of their home. While I was speaking with the complainant, he informed me that the suspect drove by as we were speaking and put up his middle finger on his left hand at him. Complainant said that they have had on-going harassment type issues with the suspect and his dogs as a result of operating a home daycare facility. He said suspect’s dogs repeatedly come into his yard when daycare parents and kids arrive, barking and growling and the guests as the children are dropped off. He said they have tried to talk to the suspect in the past to mediate the situation, but that he no longer feels comfortable due to elevated language and behavior.
“I made contact with (victim’s wife) who stated suspect who stated suspect called her a crazy lady and a stupid bitch. She stated she was very upset because of the kids being present and ran into the house to notify her husband. I spoke with juvenile victim (complainant’s daughter), who also cited suspect called her mother a crazy lady and a stupid bitch. In addition, she stated, ‘If any of you assholes ever call the police on me again, I’ll raise holy hell.’ The third victim (complainant’s son) stated suspect said, ‘If you ever come near my property, I will press charges against you for trespassing.’”'


Remarkably, Judge Asphaug heard the case and dismissed it for a lack of probable cause on the eve of trial.

When I looked into it for Communities Digital News (CDN), I found that she dismissed it despite not having a motion to dismiss- this is called sua sponte or on her own volition.

Here is what I said in CDN.


Asphaug and the Current Case

Now, Judge Asphaug will be hearing another case of Evavold's on December 3, 2019.

Here is the docket.

The tweet is a photo taken of Brodkorb's wife. Evavold may have received it though it's not clear that she did anything with it upon receiving it.

That still warranted a harassment restraining order (HRO); then, Evavold reached out to Brodkorb's attorney and they ran to the courts to say she violated the HRO.

That all happened in May but here we are at the end of the year and they are nowhere near the trial for what the county considers a criminal violation.

Their complaint is below.

Brodkorb Formal Complaint by mikekvolpe on Scribd
As the case has progressed, it has seen a number of judges and Asphaug, it seems, was just added to the December 3, 2019, hearing, a pre-trial conference, according to the docket.

It seems Judge Asphaug is not done corrupting things in favor of David Rucki and against anyone who gets in his way.

I reached out by email to Judge Asphaug as well as Beau Berentson, Alyssa Siems-Roberson, Lissa Finne, and Kyle Christopherson, who all work in the public affairs department for the Minnesota Courts.

If any provide a response, I will update.

Find more information on the whistleblower at this article on Real Clear Investigations.

There is more at Washington Examiner: one, two, three, four and five.

Posted by mike volpe at 7:32 AM No comments:

The article is here.
Posted by mike volpe at 10:31 AM No comments:

Posted by mike volpe at 9:37 AM No comments:

Two parts to this interview. Listen to Samantha Rucki's full recording below. I was on Northwest Liberty News also talking about this.
Posted by mike volpe at 6:24 AM No comments:

The Corcoran Family in Futures and Beyond

The article is here.
Posted by mike volpe at 3:15 AM No comments:

Gianna Rucki Discovers She Does Have a Mother

According to her most recent webpage on Alabama University, Gianna Rucki does indeed list a mother. Here is that page.

Athletics by mikekvolpe on Scribd
In it, Rucki lists.

No one refers to Sandra "Sam" Grazzini-Rucki as Sam Grazzini, as Gianna does.

While Grazzini is her maiden name, she has been known as Grazzini-Rucki, since she got married.

Still, this is an improvement.

It was only a few short months ago that Gianna's web-page looked like this, with no mention of even having a mother. 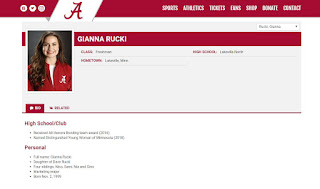 Since then, I've made it known Gianna did not even put her mother down in an article on The Daily Caller and here.

Here's what I said in the Caller, "On her college webpage, Gianna Rucki lists her four siblings and her father, but doesn’t list her mother at all. Erasing a parent — as Gianna appears to have done — is considered a form of parental alienation, the very thing Sandra Grazzini-Rucki was accused of doing."

I asked Gianna about this at her college email, but she did not respond.

For more on the Rucki case and Gianna's disappearance see this 2013 story.

Her mother was charged and convicted of six felonies in 2016. Sandra "Sam" Grazzini-Rucki has not seen any of her five children since 2013.

Here is a recent interview I did on the Rucki case.
Posted by mike volpe at 8:48 AM No comments:

The article is here.
Posted by mike volpe at 11:13 AM No comments:

On Hear the Watchman

Part two is below.
Posted by mike volpe at 4:49 AM No comments:

FINRA Reports from its Buildathon

The article is here.
Posted by mike volpe at 9:04 AM No comments:

Here is more on the Rodney Reed case. More on the John Giuca case is here and my piece on the WK Kellogg Foundation is here.
Posted by mike volpe at 7:57 AM No comments:

The National Futures Association has Banned a Commodity Pool Operator

Posted by mike volpe at 4:22 PM No comments:

The article is here.
Posted by mike volpe at 12:17 PM No comments:

I come on about an hour in.
Posted by mike volpe at 6:58 AM No comments:

The article is here.
Posted by mike volpe at 2:52 AM No comments:

The article is here.
Posted by mike volpe at 4:46 AM No comments:

Find the links below.

6) https://minnlawyer.com/2017/01/19/michelle-macdonald-receives-minimal-discipline/
Posted by mike volpe at 3:35 PM No comments:

The article is here.
Posted by mike volpe at 3:32 AM No comments:

The House Agriculture Committee has Weighed in on the Ongoing Standoff Between US and European Regulators over Swaps Trading.

The article is here.
Posted by mike volpe at 3:26 AM No comments: