The Speculative 10 Year U.S. Treasury and It's Political and Economic Implications

Last week, I became bearish on the Ten U.S. Treasury bond. I continue to hold that position however I was also wrong about one short term movement. I saw peculiar movements in daily trading of the Treasury and presumed that it had hit a bottom. As it turns out, today the Treasury rate went even lower. (currently at 2.52% as of the writing) 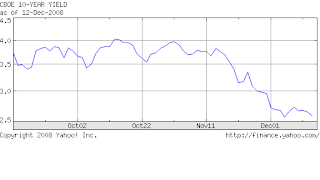 What you are looking at is the three month chart for the ten year U.S. Treasury. This is a standard chart of an investment vehicle that is speculative. The kind of dramatic drop that has happened to the rate on the ten year U.S. Treasury since the beginning of November wouldn't happen due to any lack of fundamentals. The drop is simply far too dramatic for that. This is being driven down by speculators.
So, what does this mean. That the ten year U.S. Treasury is speculative means that ultimately it will see the fate of all speculative markets. This market will crash like oil crashed, the internets crashed, and housing crashed. That's why I am bearish on the ten year U.S. Treasury.
The economic implications go beyond this. Now that the ten year has broken through a low, it is likely that it will test a new low below 2.5%. In the short term, this will likely drive all long term rates down. This will make student loans, car loans, and most of all mortgage loans even more attractive than they are now. This means in the short term the mini refinancing boom that I have written about before will get even hotter over the next couple weeks. We may in fact see the market naturally get into the 4%'s for the thirty year fixed. This should in the short term provide some sort of stimulating economic effect as people lower their mortgage payments.
The political implications can also be far reaching. There is one common thread of all speculative markets. The hotter the speculation the worse the crash. This means that the lower the ten year goes, the higher it will ultimately go when it finally crashes. When oil was at $150 per barrel, people talked about it going to $200. Now, it may go to single digits. Internet stocks became nearly non existent after the crash, and the housing market has shaved as much as 40% from its highs so far. The boomerang once it crashes will be even more acute the lower it goes now.
Now, I have pointed out that the crash may likely come when then President Obama begins the borrowing process to pay for his massive new spending plans. Here is why. Obama is looking to borrow as much as $2 trillion in the next year. He will use the Treasury bonds to do it, as that's how the Treasury borrows. As such, President Obama will ask for as much as $2 trillion in NEW borrowed funds even though the rate that debtors will get will be close to 2%. You can see where the market would view that is off balance. I believe that as soon as he asks for hundreds of billions the market will boomerang the other way. It will likely go up so quickly that it will be above any sort of moving average. Furthermore, I am betting that Obama and his team will have no concern or realization what popping the ten year bubble will do and so they will continue to borrow even though the ten year is crashing.
The ramifications of this will be severe. Just as quickly as refinancing boom will be created so to will it end. Rates will shoot up and cause downward pressure again on real estate values. Furthermore, it will make future borrowing by the Federal government that much more difficult. After all, it is significantly more difficult to pay back a $2 trillion loan if you rate is 5.5% than if it is 2.5%. Since the ten year is a pre cursor to all other long term rates, it will make most long term borrowing much more difficult. As such, it will have a devastating effect on an already weak economy. You will likely see so called experts pointing out that the Obama administration was careless in their borrowing methods. The Republicans will likely cling to this and point out that Obama doesn't have the economic sophistication to manage the economy. People will point out that the stimulus effect of all that borrowing will be counteracted by the buying power lost of higher interest rates.
President Obama will look weak and incompetent. Smart Republicans will see an opportunity to begin a new charge for fiscal responsibility. The Republicans will point to the popping of the ten year bubble as the example of the devastating effect of out of control spending. The Republicans will likely have an early political victory and have an immediate leg up heading into 2010. President Obama would need to immediately figure out how to correct his mistake. If he doesn't, he will be looking at a very different make up of Congress in 2011. Continue to keep an eye on the ten year U.S. Treasury as it will soon become the most important economic and political entity we have.
Posted by mike volpe at 11:29 AM