Now Bearish on the Ten Year Treasury and Here's Why


In September, I recommended that the only investment that should currently be made in this market is a volatility play. In this market, nothing can be predicted except that things will move a lot. A volatility play involves playing both sides of an option on any investment called a straddle. Since then, we have seen the Dow move up and down a total of about 3000 points. We have seen the 10 year U.S. Treasury bond lose about a percent and half and the S&P, NASDAQ, and other indices have all seen similar volatility.

I will now augment one forecast and that is the ten year U.S. Treasury. Currently, the U.S. Treasury 10 year is yielding an interest rate of 2.7%. What this means is if you bought a unit of the U.S. Treasury on Monday, you would receive and annual yield of 2.7% on your money and then receive your investment returned to you at the end of the ten years. The U.S. Treasury bond, like any bond, works in reverse. What I mean by this is that the stronger the bond is the lower the interest rate it pays. Currently, it is as strong as it has ever been except for two days earlier when it was even yielding 2.55%. Within the last couple months, the ten year was paying as much as 4.1%. In its history, it has gone as high as double digits. 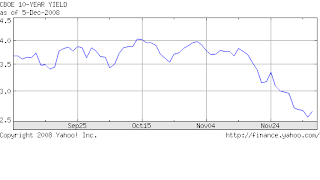 The chart to the left shows clearly just how enormous a run the Treasury has had. This is due to two factors. The first is the enormous malaise that is gripping the economy. The Treasury, like any interest bearing investment, responds in no small part to inflationary pressure, or lack thereof as the case maybe. In this case, if we have any pressure, currently, it is deflationary pressure. As such, we have seen the Treasury gain tremendously.

The second response is market manipulation caused by speculators. While we have had an enormous amount of bad economic news that has transferred into great news for the Treasury, the reality is that much of the news is no different than similar news we had throughout September and October. Whereas the response was somewhat muted then, the response is overwhelming now. The week before Thanksgiving saw the Treasury gain in an enormous way. The analysis afterwards said that it was due to an announcement that the Federal Reserve will buy $600 billion in toxic mortgages. While this is no doubt good news, similar news has been heard before. In September, the Treasury announced that it would buy billions in Fannie bonds.

There has throughout the last couple months been all sorts of news and announcements, and it is never clear how much impact they might have. That this latest announcement had such a massive impact tells me more about the impact than the announcement. While the post move analysis focused on the news from the Fed, I believe that this was nothing more than a red herring. The real culprits behind this extraordinary move were speculators.

This brings to the events of the last few days. On Wednesday afternoon, it was first revealed that the Treasury was looking into buying a massive amount of Fannie/Freddie bonds in order to drive down mortgage rates to 4.5%. Then, on Friday the Deptartment of Labor announced that in November about 533,000 jobs were lost. Furthermore, the revised estimates for September and October as well. These two pieces of news should have exacted a favorable response from the Treasury bonds. Instead, Treasuries barely moved on Thursday and on Friday they had a horrible day. In other words, in response to the economic news being much worse than anticipated, Treasuries responded as though the news was inflationary. There is no greater evidence that this market is being driven by speculators. It also tells me that the speculators are done pushing the rate down, and so there is only one way to go now.

The problem with predicting a market run by speculators is that they themselves don't know where it will move. That said, there are several things that tell me that over the next six months, we are headed for a serious move up in the rate paid by the Treasuries. The first is that they are now paying next to nothing. The Treasury is in many ways no different than any other fixed income security. When it pays only 2.7%, that isn't much of a return. Investors are a lot less likely to invest at 2.7% than at 4% especially when it reached 2.7% mostly on the back of speculation.

Second, we are in for a round of serious borrowing soon. We still have about $300 billion left to borrow for the financial bailout and Barack Obama wants another $500 billion on his first day. Once the Treasury dumps an added nearly $1 trillion in new Treasury bonds, that will put an enormous amount of upward pressure on the rate of the Treasury. Furthermore, given its record low rate of return now, there is a very large chance that it's upward trajectory following this stimulus will continue to be above its moving average. The moving average is a figurative angle that sets up the short term technical movement of any investment. If an investment stays above this moving average there is a great chance it will continue upward. If the Treasury takes off on a massive run up it will likely continue because it will als be staying above its moving average.