A "Contrarian" View on the Economy

Here is the calendar for the release of economic numbers for the next month. By my count there will be about fifty different numbers released over the next month or so. My point is that there is so much economic data that anyone can frame it to mean whatever they want. To cut through much of the spin, I only look at three: GDP, unemployment, and inflation. These three numbers tell the tale on where the economy is at. It isn't that the rest of the numbers aren't important. They are to certain folks however with so much data once someone starts to examine more than the three I mentioned the data can be whatever they want it to be.

The latest GDP numbers had the economy growing at a healthy 3.6%. Now, let's look at a chart of GDP in a longer term view...

Thus, not only are the most recent GDP numbers healthy but as you can all see they have been healthy for years.
Now, let's look at the unemployment numbers...

Again, the unemployment rate is healthy and has been since the middle of 2005. We can even look at the unemployment numbers in another way. Let's look at the monthly job growth numbers. Again, we see that the last four years we have had jobs growing every month. In fact, 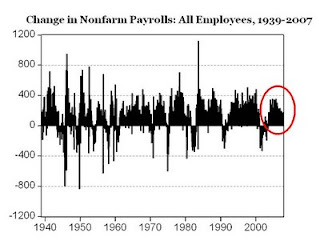 we have increased jobs for 51 straight months and counting. Over the last four years we have averaged a healthy roughly 170,000 new jobs per month.

What we have here is steady inflation with a troubling last month. Here is how it was reported.

A record jump in gasoline prices pushed up wholesale inflation in November at the fastest pace in more than three decades, while retail sales showed unexpected strength.

The Labor Department said Thursday that wholesale prices rose by 3.2 percent last month, the biggest increase in 34 years. The jump reflected a 34.8 percent surge in gasoline prices. Outside of energy and food, core inflation posted a 0.4 percent jump, double what was expected.

But in more upbeat economic news, the Commerce Department reported that retail sales increased by a better-than-expected 1.2 percent last month. It was the biggest sales advance in six months and evidence of widespread strength in a number of areas, from department stores to clothing shops and furniture stores.

Not necessarily. A weak dollar can be good for the U.S. economy, because it makes American exports cheaper and, therefore, helps close the trade deficit.

The most obvious effect of a weak U.S. dollar is its impact on American tourists traveling to Europe. In Paris, $7 cups of coffee and $50 taxi rides are suddenly de rigueur. A weak dollar affects even those American consumers who never leave home. If you have a penchant for German cars or French wine, expect to pay more, as European manufacturers raise prices to compensate for the weak dollar.

In fact, some economists warn of an "umbrella effect" — the tendency for the prices of all goods and services to rise once a few do. Other economists, though, say the risk of inflation is exaggerated.

Thus, a weak dollar is expansionary, boosting jobs and GDP, and arguably inflationary. So, what is the point of this economic lesson? Given what I have just shown why is the Federal Reserve so gung ho to lower the Fed Funds Rate. Over the last several months the Fed has lowered the Fed Funds Rate by a full percentage point. This despite the economic numbers I showed showing that if we have to fear anything it is inflation. It gets worse. Most of the so called experts say it isn't enough and too little too late.

The Fed did the right thing today by cutting the Fed Funds rate by 50bps rather than the 25bps that most market participants were expecting. The liquidity and credit crunch in the financial markets is still serious and the downside risks of a hard landing (recession) are now large enough that doing 50bps was the minimum necessary to try to prevent a hard landing. In my view this is still too little too late.

In 2001 the Fed started to aggressively cut the Fed Funds rate in early January – at an inter-meeting date – by 50bps and it pushed down the Fed Funds rate all the way from 6.5% to 1.75% by year end. Still, that aggressive Fed easing that continued throughout 2001 did not prevent a hard landing, a short but still painful recession in 2001.

The reason was – in part - that we had then a glut of tech capital goods and the demand for capital goods becomes interest rate insensitive when there is a glut. In situations of glut easing rates is like pushing on a string. Today, instead of a glut of tech goods, we have an unprecedented glut of unsold homes that is getting worse, a glut of autos and motor-vehicles and a glut of consumer durables. Thus I fear that, while a Fed easing may put a floor to the size of the hard landing, it may not prevent it for the same reasons why it did not prevent a hard landing in 2001.

Now, this particular so called expert compares 2007 to 2001. Of course, in 2001, we came off the internet bubble popping in which 3 trillion dollars were lost in the market, and nine months after the initial cut we had 9/11. Yet, this expert sees fit to compare the two as though they are at all the same. Of course, the cause of all of this angst is centered on one industry, housing. Many of the same so called experts believe the mortgage mess will lead to an eventual recession.

Johnson said, "We certainly have the most sympathy for those that have been hoodwinked, seduced into taking out mortgages at teaser rates without fully understanding that those rates would be reset."

Rates that are set to soon double even triple homeowner's monthly payments. Johnson says with foreclosures on the rise, government leaders have to look at the bigger picture.

Johnson said, "Will this problem lead to a slowdown, serious slowdown and cause a recession."

I agree that we should all look at the big picture, and I also agree that the mortgage mess could, COULD, lead to a recession, but then again, anything COULD lead to a recession. Is taking care of those that we have sympathy for looking at the big picture though? How about looking at one industry and discerning effects on the entire economy...is that looking at the big picture?
The mortgage mess has caused problems that people can see and sympathize with and that is one reason why many believe that the powerful should step in. It is also one reason why many believe it will lead to bigger problem. That said, the reason the Fed chair is appointed not elected is specifically so that they can rise up such emotional responses. The Fed chair is supposed to be able to discern the numbers in a sober fashion and make moves based on logic and reason not emotion. If GDP is a healthy 3.6%, unemployment is a healthy 4.7%, and inflation just had a troubling month, is this really the right time to lower rates?
If I am right, the Fed chair is lowering rates while the economy is doing fine and possibly too fine. Even if the inflation numbers were merely a one month anomoly, the rapid drop in the Fed Funds Rate could be just the right catalyst to make the anomoly a reality.
Trying to discern future economic health from one industry is fool's gold in my opinion. When tracking the health of the overall economy this rule applies...

How many people called doom in the early part of this decade because manufacturing was weak. Let's look at just one example.

Ryan, who represents a highly unionized, blue-collar district in northeastern Ohio, cited a recent criticism of President Bush's economic policy: The assertion by a top White House economist that "outsourcing" American jobs overseas was good for the U.S. economy in the long run.

"The constituents in my district whose jobs were just outsourced do not agree. They and the more than one million other workers nationwide who lost their jobs to overseas labor during the past three years find this statement outrageous," Ryan said.

That article is from 2004, and right after Ryan made those claims the economy went on a four year run in which nearly 8 million jobs and counting have been created. The Fed chair is selected not elected specifically so they can rise up such demagoguery and make decisions based on reason not emotion. Let the politicians appeal to people's emotions. The fed chair is supposed to look at the whole economy, not just one sector, and make decisions based on that.
The health of any economy can be guaged by looking at the GDP, the unemployment rate, and inflation. That's it. All the other numbers can be analyzed to give whatever result you want. If the economy is measured based on those three simple numbers, then our fed chair is practicing expansionary policies at a time when the only policy they should be thinking about is contractionary. I hope I am wrong however based on a simple analysis of the numbers, I am convinced that we have an inexperienced Fed chair responding to emotion rather than reason and implementing the exact opposite policies of those they are supposed to.
Posted by mike volpe at 9:23 AM