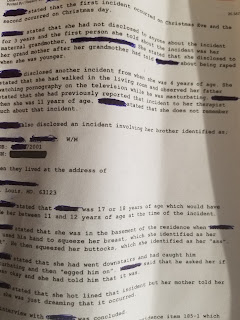 (Part of an explosive report: A now 14 year old describing abuse going back a decade

A shocking new police report has landed in my hands and it spins an evolving case on its head.

Last week, I brought the story of Melissa Hagemeier.

She has not seen two of her children since November 2020; though she had custody at the time, a St. Louis County judge, Virginia Lay, separated her entirely from those two children using a dubious Temporary Restraining Order (TRO).

Part of that order is below. 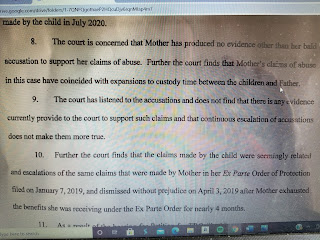 "The court is concerned that Mother has provided no evidence other than her bald face accusations to support her claims of abuse." Judge Lay says in her TRO.
But even if this was accurate at the time, it is no longer accurate.
In fact, Jefferson County Sheriff's Office- where Hagemeier's ex currently lives- has been investigating Hagemeier's ex-husband for about as long he's had custody.
During that time, his daughter, now fourteen, has disclosed abuse which goes back approximately four years. Below she describes a Christmas incident about four years ago. 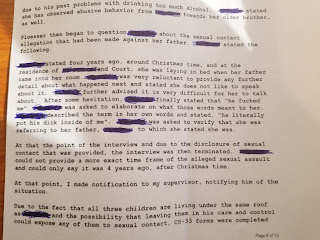 "He fucked me," the fourteen year old said referring to her father that Christmas. "He literally put his dick inside of me."
In another portion, the girl states that her father took her virginity. 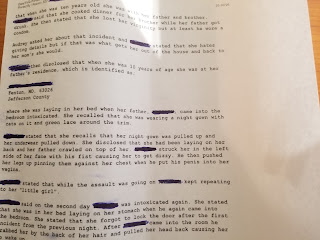 "She then stated that she then lost her virginity but at least he wore a condom," the girl states in this portion, "{The girl} stated that she recalled that her night gown was pulled up and her underwear was pulled down. She disclosed that she had been laying on her back and her father crawled on top of her. {Her father} struck her in the left side of her face with his fist causing her to get dizzy. He then pushed her legs up pinning them against her chest when he put his penis into her vagina."
This report was only released within the last week, but the girl remains in her father's sole custody, despite.
This is a story I previously featured in my series on St. Louis courts, and particularly  a corrupt network of guardian ad litem who presented themselves in the now infamous Zoom conference.
The Guardian ad Litem (GAL) in this case, Margaret "Molly" Murphy, was on the call but did not speak.
Murphy appeared shocked when she received a copy of this report. "I have the police report and the supplemental report from Jefferson County Sheriff's Office. Which contains the evidence from the CAC interview.
"I'm absolutely disgusted at the acts of abuse that were lined out that {Melissa' daughter}has reported."
But Melissa said the day after Murphy wrote this to her, she pulled back. Instead, her ex-husband's attorney has filed a motion to force Melissa to be deposed.
Melissa told me that prior to the receiving this particular report Murphy, when confronted with allegations of abuse by Melissa's ex, would say, "In my heart, I know it's not true."
I reached out to her at her office but she did not respond to my voicemail.
Upon Murphy's recommendation, Dr. Anne Duncan Hively was appointed to provide therapy, though she only is currently giving therapy to this girl, and not her brother who was also taken.
I previously released this audio of Dr. Hively coldly telling Melissa that her response to what has happened in court is the source of her daughter's anxiety.
"Melissa, you're being quite clear about your anger at the system was hard on her." Dr. Hively said in the recording, "What I'm saying is it was hard on her. Your anger at the system."
Dr. Hively did not respond to my voicemail to her office for comment.
In another recording, both Dr. Hively and Murphy suggest their goal in this case is to get 50/50 custody; this was recorded prior to the release of this latest report.
"Our ultimate goal is I would think- mine has been- is for the kids to share equal time and be happy, healthy, mentally healthy, okay in school. All that kind of stuff," Murphy states.
Hively says, "I think that's something the kids would also like."
This is a ludicrous assertion; in the other audio, the daughter is weeping saying, "I just want to go home."
Hively is as corrupt as the day is long.
Melissa's ex-husband's current attorney is Ryan Munro, from Lake and Munro.

Munro took over in September 2020; he quickly screamed parental alienation- as I described in the previous story- and the court and its actors followed his lead.
In the police report, the detective reached out to Munro, but Munro did not appear helpful.
"Ryan stated that he would need to speak to his client prior to {Melissa's ex-husband}agreeing to make any statement."
This was noted on March 9, 2021, and it does not appear as though his client ever did make a statement.
I asked Mr. Monroe this in my voicemail but he did not respond.
Melissa told me that the St. Louis County Sheriff's Office was finishing its investigation and preparing charges however none have been filed.
Post Script
Please check out my previous articles on St. Louis County: Article 1, Article 2, Article 3, Article 4, and Article 5.
Also check out the crowdfunding campaign which supports this series.
Posted by mike volpe at 4:04 PM

This is HEINOUS! This is exactly my concern of corruption within what most perceive to be a just & fair judicial systems..

We need MORE Resources & Recourses for people whom have given to contract in the judicial system by way of a parenting plan.. Going Grey rock can be successful however fails, if contracts are entered into under principalities.. I'm of the experience that this just & fair entering into a contract is actually a mode of today's very much still alive SLAVERY. Add now the mode of debiitation on humanity with maskes HUMAN TRAFFICKING! Essentially it's relinquishment of one's RIGHTS in full effect operating masked because it's Unseen & Unheard. The entering into contract with the judicial systems today is a conditioning mode of SLAVERY.

She needs to be locked up in a maximum security prison in Gen Pop so she can get her karma and see how it feels. She better quit and run away because she’s as guilty as the pedophiles that she profited off from. I’m spreading this to every major news outlet, the FBI, every fucking branch of the US Government and maybe even the UN for crimes against children and sex trafficking.
If you are a corrupt judge, attorney, guardian ad litem or psych evaluator, watch out because we’re all coming forward. We can’t all be liars with BPD and Delusional Personality Disorder now can we?