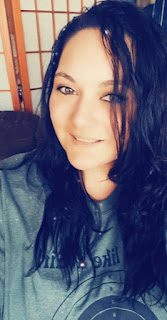 Joanna Shugar has a story to tell, and she’s telling it exclusively here.

She was born in England the product of a rape to an unwed teenager who was living in a group home.

She was taken two months into her life by British social services; her birth mother would not hear or see from her for decades.

She was quickly adopted by an American military couple- the Green’s- stationed in England, who moved her to Florida when she was three years old. At eight years old, she was removed from the Green’s because she was being physically abused.

From that point forward, she was moved from group home, to foster home, to abusive adoptive homes, trapped in a system she never chose to be a part of.

"I was stolen by cps from my crib after they failed to have me aborted to cover up the fact my birth mother was raped and they of course swept that under the rug. I was molested in care. I was adopted and severely abused," Joanna told me in an email.

I recently spoke with Gwendoline Gates who is now living in Essex, England. She is Joanna’s birth mom. Joanna said she reached out to her recently through social media.

Authorities moved her but then also pressured her to have an abortion, which she refused. 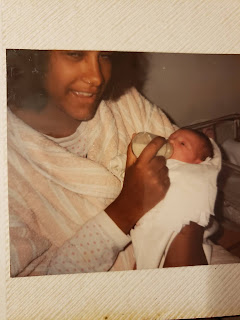 (Joanna and her birth mom, shortly after Joanna was born)

Gwen was next moved to the Beacon Lodge Home for Young Mothers.

Beacon Lodge was a home for unwed teenage mothers like Gwen.

Gwen told me she was taking care of Joanna for about two months, when she went to feed her in the morning and Joanna was not in her crib.

She told me several social workers and a police officer then confronted her and told her that her daughter had been taken by social services.

She told me they then held a trial and determined she was unfit and took Joanna; she would not communicate with her again until recently.

Joanna told me she was then quickly adopted by an American military couple- the Green’s- Joanna told me, or at least that's what she was told.

Joanna moved to the US, she told me, when Mr. Green was transferred when she was three years old.

The Green’s settled in Florida. 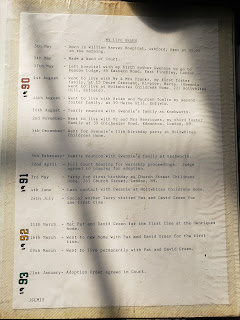 (A timeline of events of the first three years of Joanna's life)
I reached out to CAFCASS, the British Social Services, to try and confirm some of this story and get a comment; instead, I received a history lesson.
"Unfortunately, this isn’t something Cafcass can help with as it predates our organisation – established 2001," their media department told me, continuing by explaining what social services was like when Joanna was being adopted, "Cafcass was established as an amalgamation of several agencies. It brought together the services previously provided by the Family Court Welfare Service, the Guardian ad Litem Services and the Children’s divisions of the Official Solicitor’s Office."
CAFCASS suggested I reach out to the local authorities.
Beacon Lodge was closed down in 2014, according to a news story, but that story said the Beacon Lodge Charitable Trust remained open.
I reached out to the trust by email and received this response, "This is a charity based in North London.  We did run a residential centre in East Finchley for over 100 years, but that closed in 2014 and all the records were moved to the London Metropolitan Archives (LMA) where they can be consulted if necessary."
I reached out to the LMA and will update if there's a response.
Moving to America
Joanna said she moved to the US when she was three with the Green's and her name was changed- temporarily as it turned out- to Joanna Green.
But at eight years old, social services removed her. She was removed because her adoptive father was physically abusing her. Below is part one and part two of an interview Joanna did with me which describes what happened next.
Joanna said that upon being taken away from the Green's, she became a product of the system.
She was initially taken by a foster parent before nearly being adopted. 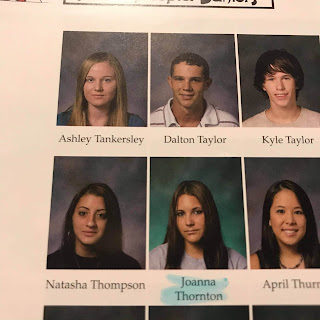 (A yearbook from when Joanna was known as Joanna Thornton)
She was nearly adopted by a woman named Terri Davis.
I spoke with Terri, who has stayed in touch with Joanna.
Davis told me that she got along with Joanna and things were looking up when a cancer had recurred.
She said she had to pull out of the adoption suddenly to treat the cancer.
This came as a shock to Joanna who was then moved to live with a family named the Thornton's.
Terri told me that Joanna and Mrs. Thornton, in particular, did not get along.
"Joanna was very headstrong," Terri told me, stating further that the Thornton's were ill prepared to deal with all the issues Joanna had as a result of her upbringing.
The Thornton's, Davis told me, then had their own marital difficulties, and Davis wound up taking care of Joanna for a few months, before Joanna was moved again, this time into a series of group and foster homes which she would often run away from.
I spoke with a former CPS caseworker who told me she spent six months working with Joanna as her case worker. Below, she described that chaos.
"I only spent a specific amount- when I got her I worked in Escandia County- and Joanna lived in Santa Rosa, which was the county next to us. So, her case, it was a special condition, that's what they told me. She was abused or abandoned or neglected, whatever, in Santa Rosa, so they weren't allowed to oversee it, so they sent it to us," she said.
At this time, in Joanna's mid-teens, things were so bad in her adoptive home that she asked to be placed back into the foster care system, which any child over thirteen, the former social worker told me, could legally do in Florida.
"I was not physically abused in the group homes; I was only physically abused in the adoptive homes," Joanna told me.
I reached out to Florida Department of Health which oversees foster care and social services, but they did not respond to my email.
The former social worker also described the atmosphere in CPS when Joanna was in the system.
"During my time there, I started when I graduated from college," she told me, "I was like twenty-two, and the majority of the people I worked with were now. There was huge turnover; they would quit all the time. No one really knew what they were doing, and so these kids- most of the ones  I worked with were teenagers- and teens go through different things, the body is changing, mind, different things like that, and it seemed like they were being placed from place to place because nobody wanted to take care of them."
Joanna finally aged out of the system in 1998, when she turned eighteen.
The Jacked Up Immigration 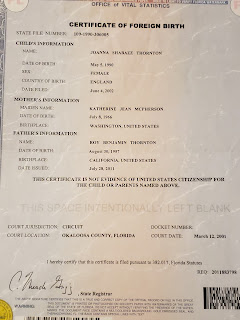 (Joanna's certificate of foreign birth)
The foster care system wasn't done taking its pound of flesh from Joanna.
She explained more, "When I was adopted by the Green's, they never got my own separate citizenship. When I was adopted by the Boardman's, they changed- of course they changed the birth certificate- because it's right there in court. They never changed my social, and again, I never got my own citizenship." Joanna said in the interview. When I was put back into the system, I had to go under two different names because they didn't match up. When I turned eighteen, my case worker at the time, came by, and told me, 'your identity is screwed; we don't know what happened, good luck."
Indeed, it appears that foster care at least tried to fix Joanna's lack of citizenship. 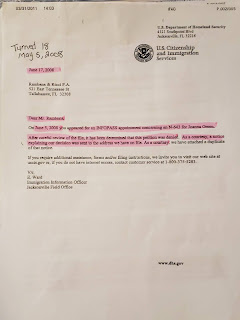 I reached out to the attorney listed, Neal Rambana, from the law firm Rambana & Ricci.
He provided me with this remarkable answer, "I truly do not recall this matter.  I’ll take a look around and see if I can find anything to refresh my recollection."
His clerk also sent me an email saying there was nothing in their files.
Joanna said she was not surprised as she never spoke with the lawyers, and all the communication was done with foster care as a buffer.
Whatever the reason, according to the letter, US Citizenship and Immigration Services (USCIS) denied Joanna's application for citizenship.
I asked what the reason could be, as she was brought here when she was very young and she was brought here legally.
USCIS declined to comment, citing privacy rules.
Joanna provided me with a correspondence which stated that she was denied because she never was adopted. 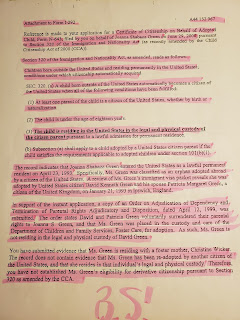 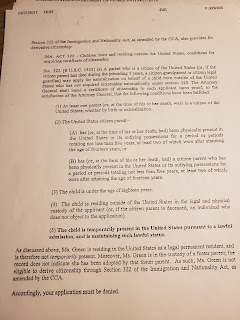 Joanna told me she went through an adult adoption to try and fix things, but only some things have been fixed. It's this adult adoption which creates her current name, Joanna Shugar.
This story does have a happy ending, at least sort of. Joanna aged out of the system at eighteen and somehow built a life for herself.
She has three kids of her own and is engaged, except, she told me she hasn't seen one of her three kids in eight years: kept away as part of a custody battle; the other two live with her.
Post Script:
Please note that this the fourth of five articles in a special project. Please find article one here, article two here, and article three here. The link to the crowdfunding explaining the project is here.

So sad...she survived foster care only to lose custody of a child in family court ��