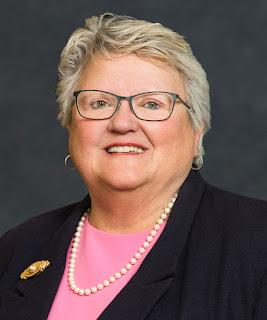 Judge Kathleen Gearin finally made a decision on a motion filed by Sandra Grazzini-Rucki.
On Monday March 4, 2019, Judge Gearin issued her decision.
Here is part of the court docket,

Coincidentally or not, the decision comes immediately after I wrote an article wondering why a decision had not been made. I wrote that article on Saturday March 2, 2019.
Here is part of that article.

“It appears the judges handling Sandra Grazzini-Rucki’s child support are not entirely sure what to do. As I recently reported, the judge assigned to the case, Judge Phillip Kanning, is no longer assigned. Meanwhile, a motion first filed in October continues to languish three weeks after a hearing to argue it was held.“That motion awaits a decision from another judge, Kathleen Gearin.”

In October, 2016, Magistrate Maria Pastoor ordered Sandra Grazzini-Rucki to pay $975 per month in child support, even though she had recently been convicted of six felonies and hadn’t worked since 2015. Here is part of what I wrote then. (a magistrate is a junior judge)

“Despite being incarcerated, a convicted felon, and on public assistance Sandra Grazzini-Rucki has been ordered to pay nearly one thousand dollars a month in child support.
“The order handed down by Dakota County Minnesota Judge Maria Pastoor on October 13, 2016, calls for Grazzini-Rucki to pay $975 per month.
“Judge Pastoor issued the order even though Grazzini-Rucki is currently incarcerated in the Dakota County jail serving her sentence which began on September 21, 2016, for her role in hiding her two daughters for approximately two and a half years.”


That order was stayed while Grazzini-Rucki finished her sentence.
The court could not wait that long; on May 7th, 2018, Pastoor issued an order reinstating the $975 per month in child support.

Grazzini-Rucki had only days before been released and was still on probation.

This was appealed and Pastoor quietly was removed replaced by another magistrate, Jan Davidson.
Davidson held another hearing; she, without requiring either party to provide income documents, ruled that David Rucki made $10,000 per month and Sandra Grazzini-Rucki made $1,429 per month.
“The obligor (Grazzini-Rucki) is voluntarily unemployed or underemployed,” Davidson wrote.
When phantom income is determined by a judge, this is referred to as imputing income.
Indeed, she has six felonies on her record and is unlikely to find work anywhere, so voluntary is a matter of perspective.
Davidson ruled that Grazzini-Rucki should pay $215 per month.
Interestingly, Davidson also noted that David Rucki receives public assistance despite her determination he makes $10,000 per month; she did not address that clear fraud in her ruling.
When, in September, the Minnesota Department of Health, moved to suspend Grazzini-Rucki’s driver’s license for non-payment, she appealed that.
She also filed a motion to stay, also in October 2018.
The Minnesota court did nothing even though the license was to be suspended at the end of October.
Indeed, the court ignored all requests until the end of January, when a hearing for February 12, 2019, was scheduled.
This may be because the assigned judge at the time, Phillip Kanning, was out of country for three months.
Kanning is a retired judge as is Gearin.
Davidson could not hear the case I believe because the suspension of the license made it above her pay grade.
Everyone believed the February 12, 2019, hearing was for the license issue, but this did not happen.
Instead, Gearin, in her March 4 order, ruled on the motion to stay.
“Petitioner’s Motion for a Stay of Proceedings is denied.” Gearin said in her March 4 order.
This should have been an easy to order to write since Grazzini-Rucki did not even attend the hearing and a motion to stay is relatively easy, but it took nearly three weeks.
The motion for the license has never been addressed and her license was indeed suspended at the end of October 2018.
It’s likely David Rucki paid his attorney, Lisa Elliott, more to attend the hearing on February 12, 2019, than he would receive for the month.
Besides that, he is a multi-millionaire, who received 100% of the estate, including four homes, nine classic cars, and 100% of their trucking business in the divorce.
Remarkably, when the divorce first started- and Sandra Grazzini-Rucki had custody in 2011- David Rucki was ordered to pay $10,000 per month in child support and alimony (he never actually paid it). This means, the first judge determined David Rucki to make far more than the $10,000 per month Davidson determined him to make.
Still, not only is he chasing after his ex-wife for $215 per month, but he has the support of his county; the Dakota County Prosecutor’s office has filed briefs in this case on his behalf.
Gearin’s order is below.
Gearin by on Scribd
Posted by mike volpe at 10:51 AM

Sandra Grazzini-Rucki's situation sounds like something somebody made up. I have attended some of her hearings, and have met her, had meals with her. Her ex-husband must have some hold - something so powerful over the judges and the entire Dakota County judicial system. I am appalled. The really obvious question is, Why is Sandra required to pay her ex any money at all, when he owns the family home(s), cars, etc... plus a trucking firm? And HOW does anybody expect her to be able to pay a dime to him, when she is relegated to unemployment? HELP!!! Can anybody hear me screaming?

Have to check case law vs City StPaul google has shutdown some issues http://sharon4council.blogspot.com similar http://sharon4anderson.org

So bizarre you have to wonder if the court is truly corrupt.

- Dakota County gives David Rucki public assistance without ever requiring income verification that ALL applicants have to submit in order to prove they qualify
- During the divorce presided by Judge Korrupt Knutson, Rucki admits to an elaborate fraud scheme that involved taking money from Sandra's family trust and using it for Rucki Trucking, a business that was already generating millions of dollars a year. Rucki admitted to a "paper divorce" meaning he filed to committ fraud. Court transcripts show that Judge Knutson believed that ex wife Sandra was unaware of the scheme...yet Knutson enables and conspires with Rucki, by illegally re-opening the divorce and issuing a succession of court orders that will leave Sandra destitute, homeless & childless.
- EVERY child support order in the Grazzini-Rucki case is based on the illegal & un-Constitutional actions & orders of Judge Knutson, followed by fellow judges that all connect back to Knutson either personally or professionally. Dakota County writes off tens of thousands of dollars in child support Dave owes to Sandra. While issuing huge amounts of support against Sandra and taking her license...yet she is homeless and unemployed!
- Dave Rucki continues to raid the Grazzini trust for millions. The childrens' college is paid from the trust. Rucki owns millions in property, cars, assets and is netting even more $$ in lawsuit $ettlements intigated after the girls ran away.
- Rucki continues to declare he is impoverished. He gets Title IV-D assistance with child support from Dakota Co bc he is on welfare. The funding is used to harass and stalk Sandra thru the court system.
- When Sandra was receiving money from general assistance, after being released from jail, Magistrate Pastoor illegally makes Sandra use welfare to pay child support to Dave Rucki. Keep in mind general assistance benefits are no more than $200 a month. How does that pay rent? Heat? Clothing? Personal items (soap, laundry, tooth paste etc)? It doesn't.
- Rucki refuses to provide any verification of income, as required by law, during the child support hearings. The judge then imputes his income to $10k per month - well above the poverty line.
- Dakota Co and MN court system has spent millions in legal costs on the Grazzini-Rucki child support case and no end is in site
- The only result of litigation is that Sandra continues to be hunted and harassed by Rucki. She is unable to secure employment, homeless and doesn't have the means to ensure her own survival...while Dave Rucki is living in luxury.

Obviously the Dakota courts are corrupt.
How could David rucki aquire Sandra's inheritance of Millions. is that true?

Correct, David Rucki is now in control of an inheritance meant for his ex-wife from her father, which I believe is the real reason all of this has been done.

Dakota county did the SAME thing to my case starting in 2006. This is not new. Wealthy men running rampant, with the help of courts, destroying lives.