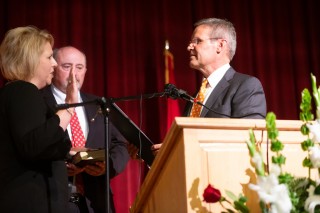 A tyrannical ruling by a Tennessee judge triggered events leading to a mother not seeing her son for over a year, but that's only the beginning of the story.

Myra Horan spoke exclusively with me about her story. She hasn't seen her son since police took him out of her arms in August 2019.

The police came because she violated the order below. 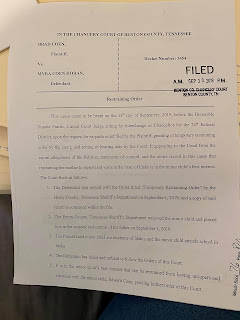 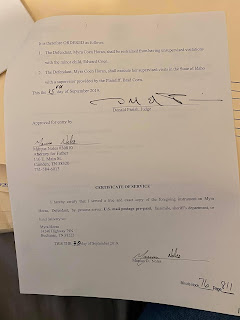 As she explained to me, there is a lot more to this story, and it includes a reckless ruling by a judge who did not give reasoning for that decision.
Myra and her ex began their divorce proceedings the summer 2016, when their son was five.
She and her ex-husband mutually agreed to a plan in 2016 without a judge which split custody equally. That plan worked relatively well until her ex met what would be his new wife and wanted to move to Idaho.
He asked the judge for permission to modify their custody arrangement and move to Idaho.
The case came in front of Judge Carma Dennis McGee. At the time Judge McGee was the chancellor for the Twenty-Fourth District Chancery Court in Tennessee, according to the website BallotPedia.
She is now a judge on the Tennessee Court of Appeals.
A trial on his request was held on December 10, 2018, and her opinion was issued later that month. That opinion is below.

Not only did Judge McGee grant Myra's ex his request to move, she made him the primary residence and even assigned some of Myra's custody time to be spent in Idaho.

"Mother will have parenting time with the parties' minor child one weekend per month from Friday at 6:00 p.m. until Sunday at 6:00 p.m. to be exercised in the State of Idaho," Judge McGee stated in her order.

Furthermore, while Myra was a stay at home mom at the time, she was still order to pay more than $250 per month in child support.

This occurred through a process called imputing income in which courts are allowed to assign income to people which they don't actually make in order to calculate income.

Worst of all, Judge McGee did not provide any reason for her decision. While both parents were deemed loving and not engaging in abuse or neglect, she simply granted his request without explanation.

"It is undisputed that both parties love their son, and the child loves both parents," Judge McGee's ruling stated, while continuing, "Both parties have provided for the children's daily necessities while in his or her respective care."

Indeed, the judge went through eighteen factors; these are the factors which the Tennessee code, according to Judge McGee's ruling, requires examining.

A move thousands of miles away is supposed to be only done with clear and convincing evidence. As Judge McGee said in her ruling, "With the parents living such a great distance from each other, the child will have to visit with the alternate residential parent in large blocks of time, and probably have to travel by airplane."

Myra also told me that the Judge McGee was buoyed by the faulty recommendations of Sherry Pritchett, who was their son's counselor and testified.

In Judge McGee's ruling she noted, "During the counseling period, the child has expressed on some occasions that he wants to relocate to Idaho and sometimes that he wishes to stay in Tennessee."

A recording tells something quite different.

In the recording, her son says he wants to live with his mom. As such, conclusions from Pritchett like this, "Ms. Pritchett stated that the child appears niore comfortable with Fathar than with the Mother," are also suspect.
I reached out to Ms. Pritchett but received no response.
Also, in Judge McGee's ruling, Myra's ex was painted as needing to move to Idaho for better job prospects.
" Father had no income between August, 2017 and December, 2017. He stated that he could not work during that time because he had lo care for both of his children and could not travel for his job. In Idaho, he believes that he will be able to drive to and from work rather than have to stay away from home."
In his testimony, the father states his current job situation is good. See screenshot below. 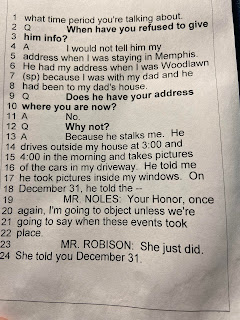 Taken together, Judge McGee twisted enough facts to make what would normally seem like an obscene ruling seem reasonable.
Myra said she struggled adjusting to the new ruling and it was this desperation which led her to withhold her son in August 2019.
Once that happened, her ex went to a different Tennessee court which granted him an order for protection and that order has kept her son away from her since.
Myra has also been active on Facebook. Find her Facebook page here.
Recently, when she shared a Facebook memory with her son she stated, "And now he sleeps 2,000 miles away and I’m not even allowed to communicate with him cause’ his dad commits felonies. Like perjury, fraud, kidnapping."
One other post is below.

“Not only for the present, but for the future”
This right here should have protected {her son} and I from my ex, his dad.
Digging through some things today.
The state of Tennessee violated the contract, aided in litigation abuse and committed crimes of human trafficking.

While I've seen many victimized parents post similar things, Myra's ex took exception and is now arguing it is a form of harassment. See below. 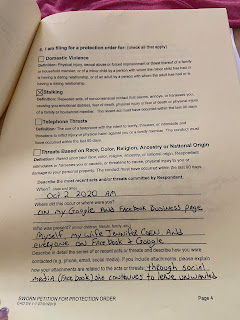 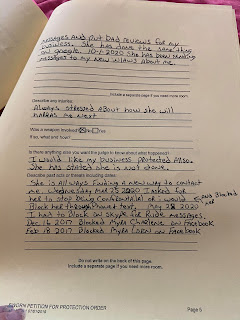 Now living in Idaho, Myra's ex got this heard in that state; the hearing was supposed to be by Zoom on October 20, 2020 at 4:30PM Mountain Time. The audio of the hearing is below.
The judge who heard it was Judge Robert Crowley, a magistrate or junior judge.
Because Judge Crowley started about twenty minutes late, the hearing was rescheduled.
It seems the hearing attracted some attention. More than ten people appeared ready to testify on Myra's behalf; her ex had no witnesses besides himself. The hearing also attracted my attention and so, if he thought this would silence Myra, the attempted order for protection may have created more attention toward the matter.
Furthermore, the hearing was sealed; I found this curious however staff say that it is policy at least in this particular courthouse to seal all protective order matters because they are sensitive.
Myra told me she sees this as her ex taking away her first amendment rights after taking her son away from her.
She is currently living with her boyfriend and they are raising their child; she said she can't afford an attorney and feels that spending money to fight this legal battle would take money and resources from the child she is raising.
I reached out to Judge McGee and the Tennessee courts but received no response.
Find an interview I did with Myra below.
Post Script
This is the second of four articles I'm doing in conjunction with a new organization entitled FIRST4. FIRST4 hopes to build software which would make activists aware whenever a child is taken by CPS anywhere in the US because the first four hours in the system are the most critical.
Find the first article here.
Posted by mike volpe at 11:10 AM

This is amazingly corrupt, upon an alegation that can be made any way and any time, this. I havew tried to move the Family Civil Liberty Union to move to end these ex parte Orders, what happens at this point is your own lawyer does not undo these lies normally accompanying these country wide due process violations, for which suspending the family court from issuing ex parte orders when they child is secure. Also, we have more than enough proof these orders alienate children and cause mental angusih and suffering to them. This is never in the best interest of the child, the accompanying actions is that you have 10 to 15 days to prove this and if not, this order dismisses on its own as an operation of law. When your own lawyer allows this, still don't change the fact that perjury was used and its really hard at this juncture that a family court will entertain that factual assertion. Ergo, off the the races and massive monies passed and your child's college fund becomes the attorneys child's college fund.