Abuse in the Courtroom of Tulsa Judge J Anthony Miller

Tulsa Judge J Anthony Miller first denies pro se litigant, Tanya Hathaway, accommodation for a "next friend" (a person who sits with you in court that can help takes notes and notes, sort through paperwork and act as support).
This violated her rights under the Americans With Disabilities Act.
Miller denied this requests over and over- while refusing to review her medical records.
When she suffers a severe panic attack later on the same day, Miller forces her to continue; and he’s even annoyed by the complication. While being treated by the EMT's you will hear she is served a subpoena by Judge Miller to return to court. Hathaway had lost consciousness.
Prior to that, Michon Hughes, representing her ex-husband, thought during the panic attack was an appropriate time to try and strike a deal.
What say you, Oklahoma Bar- is a lawyer allowed to negotiate knowing they’re in the middle of a panic attack?
See injustice in Oklahoma EXPOSED fb page to see how Tanya is fighting back Can a judge really force someone to continue while they’re dealing with a panic attack? Why have neither been sanctioned?
You will later hear Judge Miller forces Tanya to continue knowing she had to take a controlled prescription drug to help contan her panic attack.She could barely stand, talk, was slurring, not to mention defend herself in a court of law. It gets worse.

Listen to the raw audio of that day below.

Stay tuned for more bombshell details and recordings. This is a prime example why we must have rights to record. You won't find most of this in the transcripts... 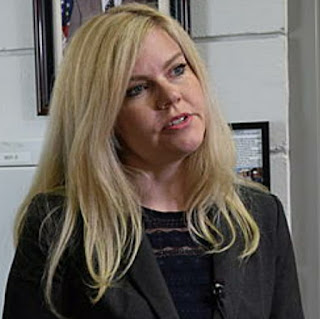 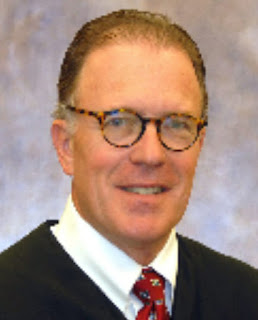 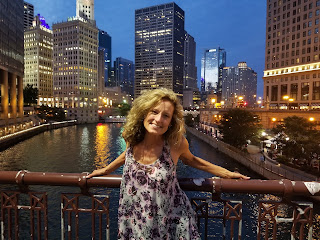 (Tanya Hathaway)
Below, see the bar complaint against Hughes.

0000 Bar Complaint Against Michon Miller 2016-10-01 by mikekvolpe on Scribd
As you can see, the Bar took each of these allegations very seriously. 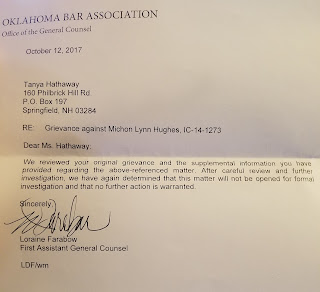 Below here is the judicial complaint against the Orwellian Miller.

For more on a 2nd victim of the Orwellian Miller, go here.

the whole unbelievable story has finally arrived: find it here!
Posted by mike volpe at 6:09 AM