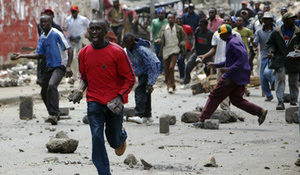 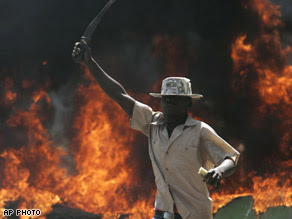 It's been 15 days since an election that was supposed to be the symbol of hope in a continent full of hopelessness turned into a nightmare. Kibaki, the incumbent, was trailing in most polls and he was even trailing late into the vote count. Then, he had a miraculous turn around. Most independent observers including our own State Department declared the election rigged. Of course, the level of sophistication in election law is such that Kibaki quickly assumed power before anything could be sorted out.
The rest of the population erupted into a wave of violence that is now playing out.
Six years ago Mwai Kibaki was elected president in December 2002 with over 62% of the vote in what was billed as the first truly Democratic election in the nation's history. He swept in on a message that promised reform ending corruption, rejuvenating the country's stalled economy and delivering a new constitution.
He actually delivered on many of the promises

But despite this, even President Kibaki's strongest critics do not deny that his administration has breathed some life into the economy. National income grew by 6% in 2006. President Kibaki is also being credited for improving the business environment for local investors. The introduction of universal free primary education has endeared him to the poor, and he has promised the same for secondary schools.

Still, he was criticized for his results on corruption...

When John Githongo, the man appointed by President Kibaki to fight corruption, blew the whistle in January 2005, he had to flee to Britain in fear of his life (see Michael Holman, "Kenya: chaos and responsibility", 3 January 2007). Githongo is himself a Kikuyu, and his denunciation of a massive series of financial scandals in which hundreds of millions of dollars had vanished was seen as a betrayal of his tribe as well as of the government he served.

Moreover, the security situation in Kenya deteriorated steadily in these years, with the ordinary people bearing the brunt of a triple process:

* a growing wave of routine crime in urban areas

* rival agrarian claims leading to pitched battles between ethnic groups fighting for land, particularly around Mount Elgon and in Kisii

* a running feud between the police and the Mungiki sect, which left over 120 people dead in May-November 2007 alone.

In this election, The situation on the ground appears to have elements of Iraq, Somalia, and even the French Revolution.
Here is how the violence is being described...

The violence has been a mix of hooliganism, political protest and ethnic bloodletting. Most of the victims have been Kikuyus, the tribe of the president and Kenya’s traditional ruling class.

That lead to a former ally, Raila Odinga, to form the Orange Democratic Movement modeled after the Democratic movement in the Ukraine. By putting together a coalition of several of the smaller tribes and riding another populist message. The crisis is complicated by twisting relationship the two current rivals also have. They were once allies and opponents of Kenya's longstanding rule of Daniel arap Moi. Odinga even spent several years in jail as punishment for his opposition and his support of multi party government. When Kibaki first got elected, Odinga was part of his cabinet. He left the government over power sharing disagreements.
The complicated combination of forces coming together to make the violence spin out of control reminds of the worst days in Iraq when AQI would combine with Sadr, criminals, other militias, to create a perfect storm of violence. The tribal nature is reminiscent of Rwanda, Somalia, and many other instances of genocide on that continent. There is an element of class warfare that strangely reminded me of the French Revolution...

Kikuyus have dominated business and politics since independence in 1963. They run shops, restaurants, banks and factories across Kenya, from the Indian Ocean coast to the scenic savannah to the muggy shores of Lake Victoria in the west. They make up only 22 percent of the population and are part of Kenya’s mosaic of roughly 40 ethnic groups, which have intermarried and coexisted for decades.

The Kikuyu tribe is the largest tribe in Kenya, however on it's own it is a significant minority.

The election, which occurred December 27th, 2007, pitted Kibaki, a Kikuyu, against Odinga, a Luo, who formed a party as an alliance of several of the smaller tribes. This is all important because the majority of the population is now blaming Kikuyu, and they are taking their frustrations out with violence. This is how some eyewitnesses described the violence

Days earlier, a group from the orphanage had been stopped by people armed with machetes and had to pay a steep amount to get away.

In Odinga's strongholds, supporters from his Luo tribe looted businesses and set fire to shops and houses belonging to Kikuyus, the tribe associated with Kibaki.

In Nairobi, the capital, tribal militias squared off against each other in several slums, with gunshots ringing out and clouds of black smoke wafting over the shanties. The death toll across the country is steadily rising

It appears that at this point no one is in control of the country. It's possible that some sort of warlord structure might evolve like it did in Somalia. While each of the leaders and parties jockey for position, the country spins further and further out of control. Anarchy appears to be fast approaching and there is really nothing that is being done to stop it.
There appear to be token measures being taken by those in a position to head this off, but they aren't nearly enough. The country is descending into chaos and genocide appears near.
Posted by mike volpe at 7:37 AM

It is a sign of our times that we sit back and watch when it comes to Sub-sahara and East africa, with Zimbabwe in particular. Man's inhumanity to man knows no bounds!
Thanks for calling by - Flametree.

Its only a case of the poor go against the poor while the rich -read political class watch in glee as brother hacks brother fromthe comforts of thir palatial mansions. note this is across the political divide not only on the government side only. What will these politicians -tycoons do when the poor realise where the cake is........?