George Soros is Trying to Buy The Election

This past weekend the blogosphere was abuzz with stories about the NY Times coming clean. For instance there is this one

After a slew of denials by apologists for the New York Times, the paper itself
acknowledged that itgave MoveOn a discount for its full-page "Betray Us" ad. The stand by rate which the Times charged MoveOn applies to ads where the run date is not fixed --and the ad specifically got sold for the Monday when General David Petraeus madehis first Congressional appearance:The old gray lady has some explaining to do.Officials at the New York Times have admitted a liberal activist groupwas permitted to pay half the rate it should have for a provocative ad condemning U.S. Iraq commander Gen. David Petraeus.The MoveOn ad, which castPetraeus as "General Betray Us" and attacked his truthfulness, ran on the sameday the commander made a highly anticipated appearance before Congress.

In their zeal to stick it to the hated NY Times, most of them missed the important part of this whole Betray US ad saga. That is George Soros and his quest to buy the election in 2008. Fortunately, Bill O'Reilly was on the case.

The real story behind the MoveOn smear attack on General Petraeus is far left financier George Soros. He has given millions to MoveOn and other Internet sites that smear conservatives and traditionalists.If you want to know the full extent of Soros' intrusion into the political process, read Investors Business Daily's editorial today. Go to their Web site. It is downright frightening.Now the far left billionaire has bought politicians, journalists, an Internet character assassins.

He wields tremendous power in this country. So much power that 24 Democratic senators were afraid to condemn MoveOn for its outrageous attack on General Petraeus. Those senators include Hillary Clinton, Barack Obama, Christopher Dodd, and Harry Reid. Again, those senators would not vote to condemn the MoveOn ad...Well, when an irresponsible far left outfit succeeds in frightening a quarter of the Senate, you know there's big trouble in this country. Not only that, some loons are even supporting the attack on Petraeus.

Elements at NBC News, for example, who parrot far left propaganda incessantly, insist the ad is a legitimate form of dissent.The New York Times is happy to discount the ad more than 60 percent for MoveOn, as we've reported. And if you read the far left blogs, they're thrilled that General Petraeus was smeared.

All those people, of course, are disgraceful. Even if you disagree with the Iraq war, a general decorated for valor fighting on a vicious battle field does not deserve to be smeared by anyone.The Democratic talking points say that the MoveOn situation is an attempt by people to divert attention away from Iraq. Well, that's false. Most Americans do not support the war. And that's fine, but they do support the troops in the field. That is called loyalty.

George Soros and his far left puppets are anti-military. They believe our forces are oppressors, corporate tools, instruments of evil. You heard NBC News commentator William Arkin say that. And it is implied in the pages of liberal newspapers every
single day.All of this makes George Soros very happy. He is the real Wizard of Oz — the man behind the curtain. He has succeeded in terrorizing much of the Democratic party.George Soros is trying to buy the presidential election of 2008. And he just might do it.

.George Soros is famous of course for becoming a billionaire by nearly bringing the British Pound down in the 1990's. He is now semi retired from investing and has set his sights on being a rainmaker in the far left circles of American politics. He is quite successful at it. He has a loosely knit network of organizations that he finances with his fingerprints being nearly untraceable. Here is how Bill O'Reilly first reported it. 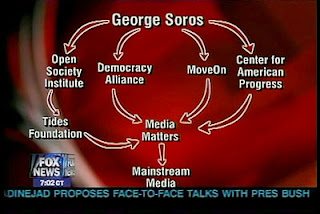 Soros has set up a complicated political operation designed to do two things -- buy influence among some liberal politicians, and smear people with whom he disagrees.Now, here's a chart of how Soros and a few other wealthy radicals who help him are funneling money into the political process. Stay with me on this. Most of Soros' political money flows through his Open Society Institute -- you see it there on the left -- which is almost unlimited funding. Since 2001, according to federal documents, the Open Society Institute has given nearly $20 million to the Tides Foundation -- right below that.

An astounding amount.Now, Tides, in turn, funnels the money to a variety of radical hatchet men, who are all well paid. For example, Tides has donated millions to the vile propaganda outfit Media Matters, which specializes in distorting comments made by politicians, pundits, and media people. Media Matters is an Internet site, but directly feeds its propaganda to some mainstream media people, including elements at NBC News, columnist Frank Rich and Paul Krugman at The New York Times, columnist Jonathan Alter at Newsweek, and Bill Moyers at PBS.In fact, as president of the Schumann Center Foundation, Moyers oversaw at least a
half-million-dollar transfer of money to Media Matters. We'll have more on that
tomorrow.Now, George Soros is also pouring money into the Center for American
Progress, run by former Clinton aide John Podesta, and the Democracy Alliance
Group, both of which fund Media Matters as well.

So you can see, an enormous amount of money this Media Matters has control of. Finally, George Soros has given the radical left organization MoveOn many, many millions of dollars. This group actively supports liberal politicians like [Democratic National Committee chairman] Howard Dean and John Edwards. It also organizes demonstrations promoting left-wing causes.So you can see how powerful this guy Soros has become. He can smear anyone he wants in a variety of ways. His organizations can raise millions for politicians, who will do his bidding. Thus, he can demand that politicians running for office do what he tells them to do.

If a liberal politician doesn't toe the Soros line, he or she will be denied funding and brutally attacked. Just ask Senator Joseph Lieberman about what MoveOn and Media Matters did to him.Now "Talking Points" has reason to believe John Edwards is taking orders from the Soros group right now. And other Democratic politicians
may be as well.The goal of George Soros, [Progressive Insurance chairman] Peter
Lewis, [Esprit clothing company founder] Susie Tompkins Buell, and other radical financiers is to buy a presidential election. By that, I mean find and fund a candidate who will tacitly do what he or she is told to do.In the past, big business has been accused of doing just that. Now it is the likes of George Soros, an extremist who wants open borders, a one-world foreign policy, legalized drugs, euthanasia, and on and on.My book Culture Warrior documents the Soros policy and his tax-evading businesses located in Curacao and Bermuda.The really frightening thing about all this is that most Americans have never even heard of George Soros. This is off-the-chart dangerous, but completely legal under the McCain-Feingold Act.In the weeks to come, we'll have more on Soros and his operations, including naming more of the mainstream media that is actively helping him, which includes Rosie O'Donnell. And that is the "Memo."

As soon as he took them on, the sent out their attack dog Media Matters to fund a study about him

An Indiana University study finds that Fox News personality Bill O'Reillycalls
a person or a group a derogatory name once every 6.8 seconds, on average,or
nearly nine times every minute during the editorials that open his program each
night.

How did such a high number of insults register in the study...well words like conservative, moderate, and liberal were considered insults. Frankly, O'Reilly is not the issue. The issue is Soros and his loose knit web presence attack dogs. He has the money and the power to buy the election, and that is why none of the Democrats running for President would condemn the ad, because if they did, he would follow in his modis operandi. His MO is to send out his attack dogs and inundate anyone that got in his way with a plethora of personal attacks until that individual called no mas, just ask Joe Lieberman and Brian Baird. The minute these two traditionally liberal legislators dared go against the far left line on Iraq, the attack dogs controlled by Soros laid into the incessently. Most of the major Democratic candidates have so far not shown the courage necessary to stand up to Soros and once elected expect them to toe the line or get attacked viciously.
The real story in the Betray Us fiasco is in fact the George Soros money machine and how they have taken the Democratic Party hostage with their money, resources, and most importantly with the extortion they perform with the threat of nonstop personal attacks.
Update:Looks like this story is starting to travel around the blogosphere. Power Line picked it up yesterday...

Investors Business Daily shinessome sunlight on George Soros's secret promotion of unworthy causes throughthe in aptly named Open Society Institute. (The editorial is one in a series onSoros and MoveOn.org that IBD compiles here.) IBD criticizes the
lag between OSI's financial support and the disclosure of the support:Soros' "shaping public policies," as OSI calls it, is not illegal. But it's a problem for democracy because it drives issues with cash and then only letsthe public know about it after it's old news.That means the public makesdecisions about issues without understanding the special agendas of groupsbehind them.Without more transparency, it amounts to political manipulation. This leads to cynicism. As word of these short-term covert ops gets out, the public growsto distrust what it hears and tunes out.The irony here is that Soros claims to be an advocate of an "open society."His OSI does just the legal minimum to disclose its activities. The public shouldn't have to wait until an annual report is out before the light is flippedon about the Open Society's political action.